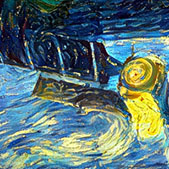 The Frontier Development Lab (FDL) is a National Aeronautics and Space Administration (NASA) machine learning program with the stated aim of conducting artificial intelligence research for space exploration and all humankind with support in the European program from the European Space Agency (ESA). Interdisciplinary teams of researchers and data-scientists are brought together to tackle a range of challenging, real-world problems in the space-domain. The program primarily consists of a sprint phase during which teams tackle separate problems in the spirit of ‘coopetition’. Teams are given a problem brief by real stakeholders and mentored by a range of experts. With access to exceptional computational resources, we were challenged to make a serious contribution within just eight weeks. Stated simply, our team was tasked with producing a system capable of scheduling downloads from satellites autonomously. Scheduling is a difficult problem in general, of course, complicated further in this scenario by ill-defined objectives & measures of success, the difficulty of communicating tacit knowledge and the standard challenges of real-world data. Taking a broader perspective, spacecraft scheduling is a problem that currently lacks an intelligent solution and, with the advent of mega-constellations, presents a serious operational bottleneck for the missions of tomorrow.