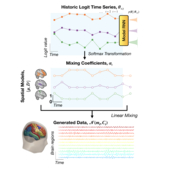 Accurate temporal modelling of functional brain networks is essential in the quest for understanding how such networks facilitate cognition. Researchers are beginning to adopt time-varying analyses for electrophysiological data that capture highly dynamic processes on the order of milliseconds. Typically, these approaches, such as clustering of functional connectivity profiles and Hidden Markov Modelling (HMM), assume mutual exclusivity of networks over time. Whilst a powerful constraint, this assumption may be compromising the ability of these approaches to describe the data effectively. Here, we propose a new generative model for functional connectivity as a time-varying linear mixture of spatially distributed statistical “modes”. The temporal evolution of this mixture is governed by a recurrent neural network, which enables the model to generate data with a rich temporal structure. We use a Bayesian framework known as amortised variational inference to learn model parameters from observed data. We call the approach DyNeMo (for Dynamic Network Modes), and show using simulations it outperforms the HMM when the assumption of mutual exclusivity is violated. In resting-state MEG, DyNeMo reveals a mixture of modes that activate on fast time scales of 100-150 ms, which is similar to state lifetimes found using an HMM. In task MEG data, DyNeMo finds modes with plausible, task-dependent evoked responses without any knowledge of the task timings. Overall, DyNeMo provides decompositions that are an approximate remapping of the HMM’s while showing improvements in overall explanatory power. However, the magnitude of the improvements suggests that the HMM’s assumption of mutual exclusivity can be reasonable in practice. Nonetheless, DyNeMo provides a flexible framework for implementing and assessing future modelling developments.